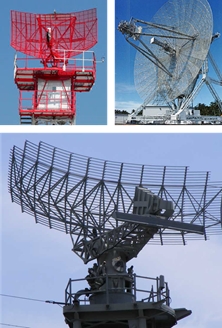 Light Detection and Ranging (LIDAR) is a technology based on the well known RADAR technology based on radio waves in use since the early 20th century to detect distant objects. The graphic above shows examples of some of the RADARS in use today. One of the limitations of using a single antenna RADAR was since it radiates power in all the directions, it required a lot of power to detect far away objects. Also the directional information obtained was limited. An innovation which helped solve this problem was to use an array of antennas to create a directional beam which could be then used to probe a particular direction. By tuning the relative optical phases between the antennas the beam could be scanned in different directions.