Wondering what hardware is required to run ANSYS? Check out our updated ANSYS hardware requirements page. Decide on your hardware form factor, learn about HPC in two dimensions and hardware developments on the horizon in this post and create a solid foundation for your ANSYS simulations that you can build on for years.

The first decision to make in the hardware buying process is to choose a form factor. Every organization is different in its computational resource requirements, number of engineers and existing simulation infrastructure. Workstations are a good starting point for many, and can take you a long way, but are more suited to a single engineer. Multiple engineers may make use of a centralized server but issues of pre and post processing can severely degrade the user experience. Whether to invest in graphical resources for a server or to supplement it with a number of relatively modest workstations is an important distinction to make early on. For even greater computational ability, clusters of machines are more affordable than ever but present their own challenges. These are conversations that we’ve frequently had with our customers and this update to the page is a distillation of our recommendations.

See our ANSYS Hardware Requirements Page to decide which form factor is best for you. 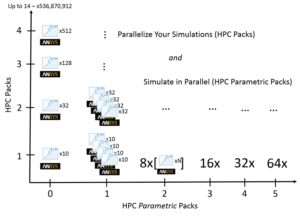 Did you know that you can scale your ANSYS simulations in two dimensions? For your parametric simulations you can run the same simulation on multiple cores or you can run the different parametric variations (design points) at the same time. You can also combine the two to really crunch through a design space in great time. In my opinion, not enough customers know about both HPC Packs and HPC Parametric Packs which is why I have created this chart.

Remember to use the Remote Solve Manager service to get the most out of your HPC Parametric Pack! You may not have a single big computer than can handle 32 simultaneous solves but if you add several computers to an RSM queue, the simulations will be distributed among the different computers.

See the HPC section of our updated page.

Looking forward to the future:

The following is not on the updated page since it would go out of date quickly, but I thought I share some upcoming things I thought were exciting:

Keep up to date on hardware and ANSYS simulation news and tips by subscribing to our newsletter: